He organized more than 20 events

Children
I have
Wants children
Yes
Smoking
No
Education
University of Life
Work
CEO & Founder at 'I am SGL' Foundation, Non-profit Organization
Food preferences
No preferences

couchsurfing - I use(-ed) this - couchsurfers
09 Dec 13:11
We searching for Volunteers!

Congo, The Democratic Republic of the
50

Saint Vincent and the Grenadines
184

I love to sightsee as much as possible. Mariusz is a fun of nature whereas. I like to meet new people, talk to them and learn about their life in other countries. The more we travel the better we see how various the world is. It is incredible how a day of a New York City stock-exchange broker differs from a day of an Indian in the Amazon jungle. That is what interests me and makes me travel more and more.

I do not watch much TV nor go to the movies that often. Mariusz enjoys documentaries about travels. I like to listen to the classical music, smooth jazz, Spanish and Latin rhythms or ethnic music. Sometimes we go the opera or national philharmonics. Mariusz likes to read psychological books.

I believe in a family life. I enjoy spending my free time with my friends. I am also very happy to meet new people because I believe that everyone has their story to tell and I can always learn from it. I live and let others live. As long as I have someone who cares for me and good health I can always get by.

The most amazing moment of my life

Mariusz: Assisting in the birth and died before my eyes.

"I wish you that you always wondered. The day you stop to wonder you will stop to think and - most important - feel". - Richard Kapuscinski

►The Coolest Adventures - what I (Mariusz) am Pr☮ud of:

-Jumping from the plane(h= 4km)-Tasman Nat.Park,N.Zealand,Nov2002
-Meeting wild animals(Big Five)in the nature,Chobe,Botswana,Nov2003
-Scuba diving on the Great Barrier Reef, Australia, November 2002
-Night in the Powazkowski Cemetery, Warsaw, Poland, August 2011
-Trekking in the Himalayas, Bhutan - May 2007
-Hot air balloon adventure flight,Jura Krakow.-Czestoch.,October 2011
-Spending a night in a sleeping bag in the open air,Antarctica,Jan2010
-Rafting down the Zambezi River, Zimbabwe, November 2003
-Spending the New Year's Eve in Sydney Bay ,Dec 2007
-Geocaching on the fjord in Norway - November 2009
-Spending a few nights in the Amazon forest, April 2003
-Staying in the African village by the Lake Malawi in Malawi,Nov 2003
-NewYear's Eve on board of the ship under the stars,Antarctica,Dec2009
-Tasting world's finest seafood, Valparaiso, Chile, April 2003
-Travelling around the world(South Pacific Islands)- Dec2006
-Running of the Bulls, San Fermin - Pamplona, Spain, July 2011
-Playing paintball in the old fort - Benelux, Stabroek, Belgium, Feb 2009
-Soccer-the biggest stadium in the world-Maracana,Rio,Brazil Apr2003
-Taking the 2nd trip around the globe (Australia&Oceania)+M.-Jan2008
-Staying with the Eskimo people in Greenland, June 2003
-Having fun at Disneyland, Los Angeles, California, August 2000
-Life in Dead Zone-25 years after explosion, Chernobyl, October 2011

In spite of the fact that I came close to death at least two times during my travels it will not stop me from ...

continuing to search for adventures.

PS Did you ask yourself: What is happiness...?

If you are not thinking of this its mean that you are happy! :)

Legend: Last Visitors of my profile from../when..
What can I offer to others
I can teach:
- How to travel my way ;)
- Driving a car
- Don't drink alcohol

Opinion about I am SGL

The best idea ever :) 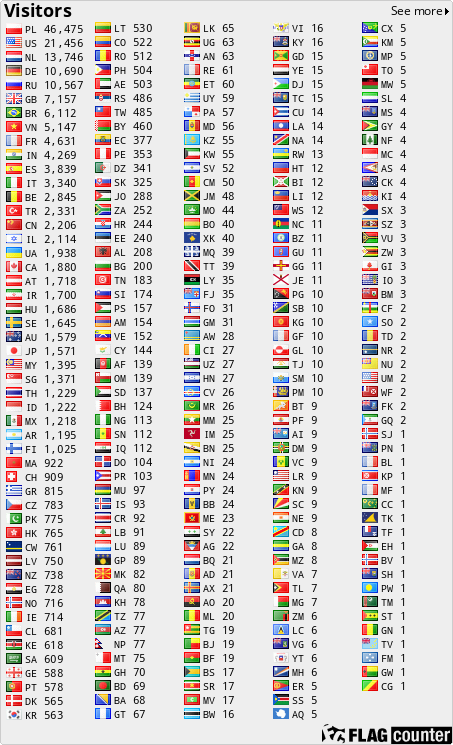 Map Legend: Red hearts - from where SGLs (my profile Visitors) are.
Waiting for server...
This site uses cookies.